“It has been tricky to get politicians, our people and other stakeholders to understand that we can’t keep throwing capital at our problems. We need to focus on operational efficiencies,” says Transnet CFO, Garry Pita, winner of the Transformation & Empowerment Award at this year’s CFO Awards. Garry took over as Group CFO in February last year, replacing Anoj Singh, who was seconded to Eskom.

Pita's verve and unfaltering commitment has been an integral force in seeing his organisation become one of the few state-owned companies to thrive in tough times. "We have a dual mandate to fulfill: developmental and commercial," he explains. "This has involved a lot of awareness-raising and transparency around the need to use an agile, flexible operating model. The finance team has been instrumental in integrating our investment plans with those of our clients and our move has been well received by ratings agencies."

Garry has a refreshingly forthright approach to management seldom seen in the public sector. From holding five-minute meetings to keep from meandering and not bogging down his team with unnecessary jargon to having the conviction to stand down foolhardy ideas, the 39-year-old is on a mission to fast-track organisational objectives without compromising his integrity. Describing himself as an "operationally connected business partner with an entrepreneurial mindset", his overarching passion for the business and focus on doing the basics right are paying off.

"I love Transnet and what it means to the continent. I am basically doing my national service. I look after procurement and capital. Leveraging that procurement spend to create industrialisation and localisation has a huge impact on job creation. I'm trying to inculcate a culture of resilience and courage, encouraging my team to make big decisions and will protect them when they go wrong," says Garry, who lists former Transnet executives like Chris Wells (also a former CFO), Louis van Niekerk and Maria Ramos, now Barclays Africa CEO, as mentors.

"I treat the company's money as if it were my granny's. My personal passion and commitment to this company plays a big role."

Transnet is the largest and most crucial part of the freight logistics chain that delivers thousands of tons of goods around South Africa, through its rails, pipelines and to and from its ports. It stands apart from other public sector organisations in that it is completely self-sustaining and does not receive government support. The company is a net borrower and has bonds in markets all over the world. 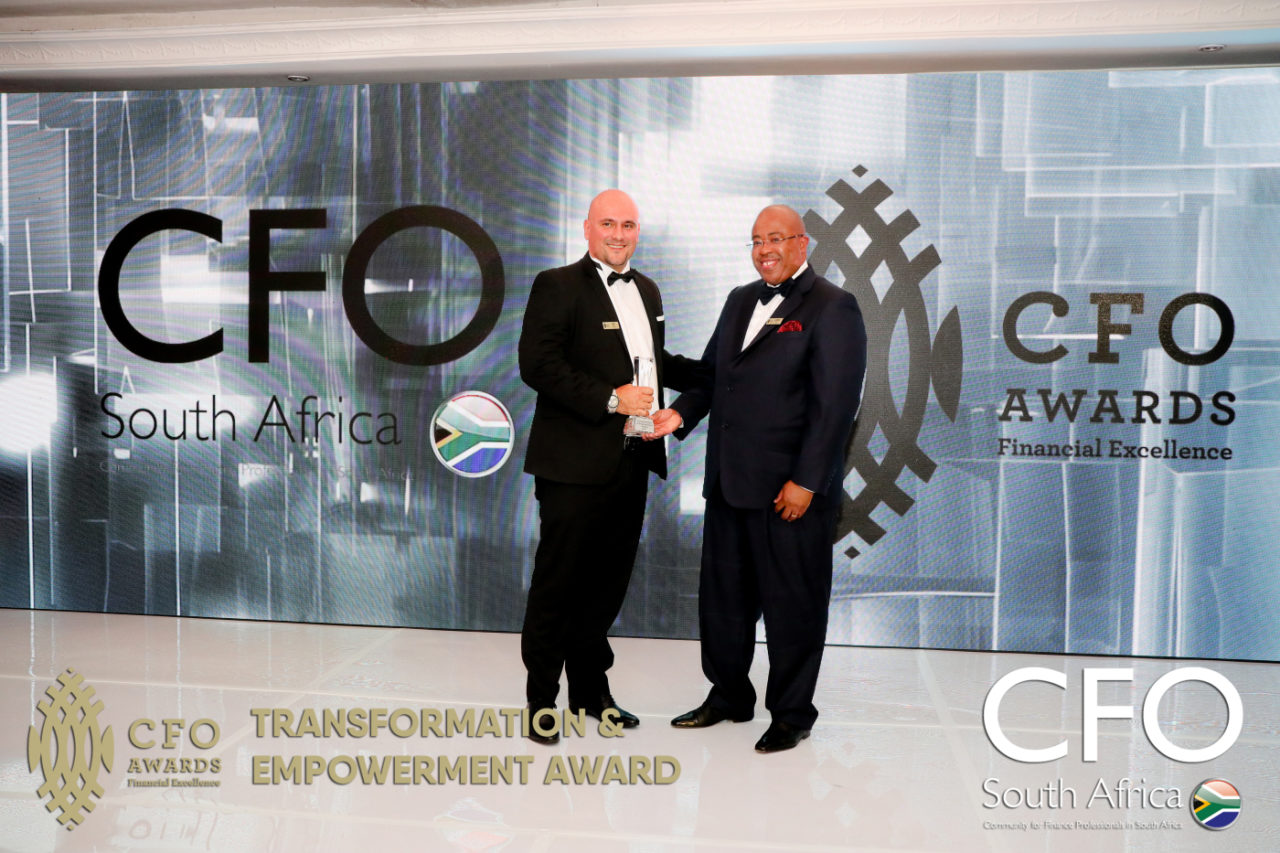 A 12-year veteran of the company, Garry succeeded award-winning finance chief Anoj Singh in 2016. Previously he worked as the group's chief supply chain officer and headed up the International Financial Reporting Standard Conversion and Transnet's group internal control. The Wits University-educated chartered accountant has been instrumental in changing the sprawling organisation's operating model, dealing diplomatically with a range of political stakeholders, renegotiating triggers with financial institutions and furthering the country's transformational objectives.

In keeping with the global trend of tech-savvy CFOs, Garry is Transnet's digital sponsor and has a hand in the company's future-focused initiatives, including a disruptive Uber for containers in partnership with General Electric that offers role-players a single port of call and invoice and tracking, with insurance and other products as add-ons. He also champions the Transnet Design and Innovation Centre, a project - operated together with Wits University, the SABS and Centre of Engineering - that gives young people the resources and environment to come up with innovative ideas.

Unapologetic
Transnet, with a massive operational budget and infrastructure capabilities, along with a workforce of more than 60,000 people, has a vital role to play in the socio-economic transformation of not just South Africa, but the continent as well," says Garry, who was overjoyed with receiving the Transformation & Empowerment Award at the CFO Awards in May 2017. "We have the best B-BBEE statistics in the country and are the best enterprise and supplier development-driven company in South Africa. We are never complacent about this."

Garry says he is in it for the long haul and he is helping put plans in place to see it to it that Transnet delivers on its transformative potential long after his tenure has run its course. He is charged with administering Transnet's R400 million per year enterprise development fund and driving supplier development through via stringent contract stipulations.

"We are unapologetic in driving transformation, forcing global heavyweights to connect with black-owned local suppliers and engaging them for a minimum of 30 percent of contract value. Many of these local firms are now partnering with these multinationals in other parts of the world. At the other end, we support empowerment firms through our enterprise development programmes."

Breaking up Transnet
Currently, Transnet is operating through five divisions: Freight Rail, Engineering, National Ports Authority, Ports Terminals and Pipelines. Garry would like to see the massive concern break up into its constituent companies in five years and be run under commodity-driven leaders, eliminating bureaucracy. He expects the finance department to play a key role at supply chain level, which will result in a significantly more agile function.

The modest financial executive and committed family man puts his success down to organisational momentum built by the efforts of its many hard-working employees. "We are changing our operating model and the way we do things. It is important to understand that we at Transnet have such belief in ourselves that we will not take money from the man on the street and pick the sovereign up. Our people have an insatiable desire to hunt for their supper and not rest on their laurels. This is not a Garry Pita story, it is a South African one. These are people who are helping to make the country a success."

Having won this year's Transformation and Empowerment award, Garry had this to say:

"This is a true honour," is what Garry Pita said after he climbed the stage during the CFO Awards on 11 May 2017 to accept the Transformation & Empowerment Award, handed out by Sasol CEO Bongani Nqwababa, a former CFO Awards winner himself. "I am very very proud of this. I accept this on behalf of Transnet because it is a team effort," said Garry. "Coming from a state-owned company, we feel the need to lead in the empowerment and transformation of our supply base in South Africa. We also feel we need to encourage localisation and industrialisation to the extent that we can become world-beaters as South africans and create exports."

By Ebrahim Moolla; this article first appeared in CFO Magazine.